This article is intended to help the designers sort through the various features available in RS-232 interface products. The main features described are the regulated charge pump, Autoshutdown, RS-232 compatible versus compliant operation, ESD protection, and data rates including Megabaud operation

Despite the development of newer digital interface standards, the humble RS-232 serial port remains the most widely used means for transferring data. Robust and easy to use, the RS-232 port is an attractive alternative to more digitally demanding and temperamental interfaces.

Two RS-232 devices still in use today, the 1488 and 1489, exemplify the early origins of this standard. Devices from that era are powered by bipolar power supplies because the RS-232 standard requires each transmitter to provide a +5V (minimum) signal for a low and a -5V (minimum) signal for a high. These higher voltages ensure greater noise immunity after they travel through lossy cables to RS-232 receivers. But they require a dual power supply and many PC boards included a negative power supply solely to power devices such as the 1488 and 1489.

In 1987, Maxim introduced the MAX232, the first single-supply RS-232 device. The MAX232 (and many other devices powered by +5V supplies) includes two charge pumps. One doubles +5V to approximately +10V and the other inverts the +10V charge-pump output to -10V. Because these charge pumps are unregulated, the positive and negative output voltages of the transmitters they power often drop well below +10V and -10V. How far they drop is a function both of the capacitance of the cable driven by the transmitters and the data rate.

The MAX232 quickly became an industry standard. Many board designers still use it, despite the fact that single-supply devices have undergone extensive improvements over the years. Understanding the features of new devices will help the design engineer choose the best parts for the application.

As power-supply voltages dropped from +5V to +3.3V and lower, single-supply RS-232 transceivers kept pace. Those transceivers that are powered from voltages ranging from 3.0V to 5.5V use two regulated charge pumps instead of the unregulated types used in the parts powered by +5V only. Rather than double the input voltage, one regulated charge pump boosts the input voltage to about +5.4V; a regulated inverting charge pump supplies an output of about -5.4V. A big power-savings advantage results, as ±5.4V driving the capacitive load presented by the cable consumes quite a bit less power than, say, ±9V.

Questions about noise immunity often arise when design engineers first discover these devices. Their noise immunity, however, is excellent, as the regulated charge pumps work harder to maintain a ±5.4V output as cables get longer and the capacitive load increases. In fact, a ±5.4V output is maintained with longer cables and higher data rates when using these devices than when using devices with unregulated outputs that are initially of higher output voltage.

Many RS-232 transceivers provide a simple shutdown feature that's activated by applying a logic level to the shutdown pin. Often this feature saves enough current to allow the battery of a portable piece of equipment to last for a sufficient amount of time. Another means for shutting down the power of an RS-232 device is available, however; it places the RS-232 device into shutdown mode whenever it detects that the RS-232 interface isn't in use. This feature, called Autoshutdown, is useful, because in many applications RS-232 devices are used for only short periods of time.

The Autoshutdown feature monitors whether the RS-232 interface isn't in use by detecting whether a cable is present. If a cable isn't connected to an RS-232 transceiver, there's no reason to power the device. A transceiver equipped with the Autoshutdown feature monitors the RS-232 signals at its receivers to determine whether a cable is connected. When a cable isn't present, the signals at the RS-232 receiver inputs hover near 0V; the transceiver shuts down when all its receiver inputs are at or near 0V. The part automatically takes itself out of shutdown if any one of the receiver inputs exceeds +2.7V or goes below -2.7V (i.e., whenever the cable is reconnected). Also, this feature can be overridden with signals that force the device on or off.

Figure 1. The Autoshutdown Plus logic incorporated in an RS-232 transceiver such as the MAX3238 allows the transceiver to stay powered as long it detects signal transactions at its transmitter or receiver inputs within 30 seconds. Otherwise the transceiver is automatically powered down because no signal transactions are present. Logic levels applied to the FORCEON and FORCEOFF-bar pins turn device power on and off independently of whether signal activity is detected.

To be compliant with the RS-232 specification, transmitters are required to provide a ±5V output. For RS-232 receivers to be compliant, their thresholds must be ±3V maximum. Thus, these devices operate with a healthy ±2V noise margin (and often more, because receiver thresholds are usually lower than ±3V). It's possible to erode some of that margin and still maintain accurate data transmissions. Margins get reduced when transmitter output voltages span a narrower range. When transmitter outputs are a minimum of ±3.7V, they are considered to be compatible, instead of compliant, RS-232 outputs. For example, when you power an RS-232 device that doesn't contain charge pumps (and hence is cheaper and smaller) with ±5V supplies, its output voltages cannot possibly reach ±5V. A device operated under those conditions with transmitter outputs of ±3.7V at minimum is said to be RS-232 compatible instead of compliant.

All RS-232 devices include ESD-protected structures on their pins to protect against electrostatic discharges encountered during handling and assembly. Some manufacturers offer devices both with standard and enhanced protection. Because both the standard and the enhanced-protection parts almost always come with the same pinout, adding devices with enhanced ESD protection usually requires no modification to an existing PC board.

Some applications require ±15kV ESD protection on both the RS-232 and the CMOS digital pins. For example, in order to reduce cost and size, cell phones do not include the RS-232 transceiver in the phone itself. Instead, they route CMOS-level signals out through the connector at the bottom of the phone. If the cell-phone owner wants to connect to the RS-232 port of a laptop, he or she purchases a "data-lump" cable, which includes an RS-232 transceiver. In this situation, both sides of the RS-232 transmitters and receivers are brought out to connectors, exposing them to increased ESD risk. In such cases, it may be desirable to have extended ESD protection on both the RS-232 and CMOS sides of the transmitters and receivers. The MAX3380E and MAX3381E are two examples of transceivers that are suited to this task.

The latest RS-232 specification calls for data rates of 20kbps or below. Despite this restriction, the data rates of most RS-232 transceivers far surpass that speed. In fact, today's RS-232 transceivers reach speeds of 1 Mbps. See Figure 2. To reach that speed, those devices violate another RS-232 specification, the maximum allowed transmitter-output slew rate of 30V/is. 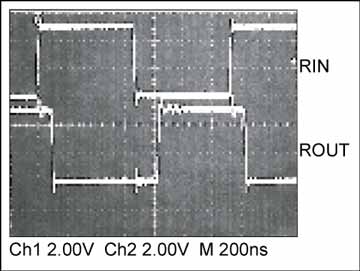 Figure 2. This scope photo shows the speed possible today when using an RS-232 device such as the MAX3180. This SOT-23 RS-232 receiver can handle signals with frequencies as high as 1.5 Mbps.

The RS-232 specification requires that transmitter outputs not exceed this slew rate so as to reduce the amount of noise generated by fast edges. The outputs of transceivers that operate at speeds of up to 1 Mbps are also slew-rate limited, but at a slew rate that necessarily exceeds the RS-232 specification. The outputs of the transmitters thus emit noise at higher frequencies than do their slower-slew-rate counterparts. The faster slew rate of these devices also creates another concern: compatibility with slower devices. If a part capable of Megabit-per-second operation transmits data at those high speeds, a transceiver capable of operating at that speed must be present at the other end of the cable. If a slower speed device is instead used at the other end of the cable, operation at slower data rates will probably work fine, although it's not guaranteed.