Power Over Ethernet - Supply of Ethernet devices over data cable

Power Over Ethernet (PoE) also called Power Over Lan (PoL), is one of existing possibilities how to transport data and supply voltage to Ethernet device by already existing net of cabling CAT5 for computer networks (10 Mbit/s and 100 Mbit/s).This standard, which will probably define the future development of Ethernet devices, was finished and authorized in last year’s June as a standard IEEE802.3af.

Although the power supply of appliances by using signal line is thing very well known from first phone devices, the authorization of standard for data lines transmission took unexpectedly long time. The computer world refreshed the idea of power supplying over data line by invention of USB and FireWire interface. Surprising about the development of the standard IEEE802.3af is that the motivation for its development was not an industrial automation as was expected. The main reason why the power supply over Ethernet was developed were the requirements of the Internet Telephony (Voice Over Internet Protocol – VoIP). 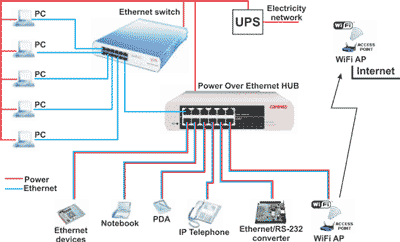 Because of high contact resistance of thin wires in connector RJ-45 the pair twisted Ethernet wires are not the ideal transmission medium for transport of high power from source to consumer. However these properties have smaller influence if higher voltage is used. According to the standard 802.3af the maximal power that can be transmitted over the Ethernet is 15,4W. This value is sufficient for majority of IP-phones that drain between 3W and 5,5W, web cameras and wireless access points of networks whose consumption is between 6W and 10W. The same holds for the majority of embedded PCs and Ethernet devices with their power dissipation around 10W.

Thanks to the PoE it is possible to install these (above mentioned) devices without need of external power supply on places with difficult access and these devices are assured against the power failure by the UPS.

Two problems are connected with the Power over Ethernet (PoE). The first one is the need to keep the possibility to use older networks elements and the second one is the compliance of the 802.3af standard if all 8 cable cores (4 pairs) in contemporary cabling (CAT5) are used. Therefore the 802.3af standard specifies the application of the PoE on contemporary cabling for 10Mbit, 100Mbit and 1000Mbit Ethernet. 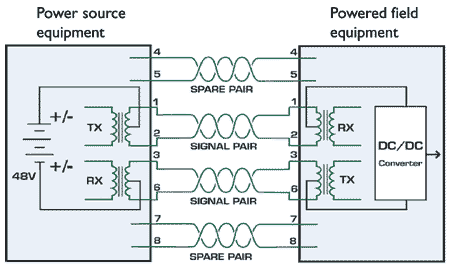 Because of the Ethernets configuration of the physical layer is the supply voltage transported by wires that are assigned for data transmission. The signals in Ethernet are transported by twisted pairs, which are connected to signal transformers included in devices on both sides of the wire. The middle-points of coil winding are on the inner side of these transformers connected (according the original specification of Ethernet) to the ground over the isolating transformer. In case that these middle-points of coil winding are connected to another direct level, the data signal on the output of device will have different direct value against the ground, because the same transformer is placed on the other end of the wire.

Because two pairs of wires are always needed for the data transmission, there are two separate middle-points of coil winding, which can be used for transmission of both polarities of direct supply voltage. Because the power supply over the Ethernet is implemented by two galvanically separated transformers no uncalled-for direct filling of the transformers core occurs.

On the other side of the connection is from middle-point of coil winding over rectifying jumper demanded supply voltage, this jumper ensures proper polarity even in cases that the cross-bred cable is used. This cable is designed for PC-PC communication but thanks to the ability to switch between different action modes of many active elements can be this cable also used for PC-HUB or PC-SWITCH interconnection.

In order to reduce the influence of voltage drop on conduit it is possible to supply the terminal device by using all four pairs. However for the compatibility conservation it is necessary to observe matching of wires. Current trend of devices maintaining the PoE standard is to prefer usage of unused pairs for power supply which ensures higher isolating consistency (according to 802.3 1500V)

The standard IEEE802.3af also specifies the detection of terminal devices from the point of power supply. The power delivery is not the only observed value, observed are also the peak power demand if the terminal device is turned on, the idle power demand and the reaction time of current protection. The source of PoE has to besides power supplying have function of short circuit protection and protection against oversized current consumption. Because of this reason five classes with different maximal allowed energy input for one port are defined.

The class of each device connected with the source is identified by the SNMP definition. According to this class the source activates the proper current protection. The class 0 with maximal power output 15,4W is defined as default. Other classes with power output 4W, 7W, and 15,4W are facultative. The fifth class was left unused for further use.

The power supplying part of the consumer 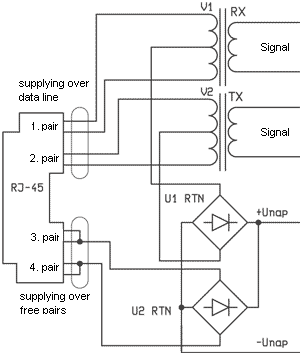 The action of circuit on the side of the consumer is also defined by the standard IEEE 802.3af. The consumer should be able to identify itself so that the power supply device could set the proper class. In respect of the default class 0 with maximal power output 15,4W could be supposed, that the consumer is always equipped by individual power supply (converter of supply voltage) and the identification is used only as a protection of more complicated devices. In more simple cases the overcurrent protection on the side of consumer is rather used.

The only serious problem with use of PoE in existing networks is the case when an unmatched terminal device (not maintaining the IEEE 802.3af standard) is connected to an active network element equipped with the power supply for PoE. For example if the middle-point of coil winding is over a condenser connected to a common ground. In this case the circuit may act as a direct short circuit. If the power supply corresponds the specification nothing happens because the power supply will stop feeding of the port.

Nevertheless the standard IEEE 802.3af dictate wiring of resistors (75 Ohms) in serial with decoupling capacitors. But it is also possible to buy a “single-ported splitter”. A single-ported splitter is a box with one input (PoE connection) and two outputs (data line= the Ethernet and the supply).

Even though the standard IEEE 802.3af was created to satisfy the requirements of the IP telephony and it therefore does not contains lots of components known from the industry automation. The usage of PoE in industry automation is expected in close future. The supply voltage between 44V and 57V is specified in the IEEE 802.3af standard, but supply voltage of 48V is most likely used. Also the true transferred power output will by different because of thin wires used for supplying and because of high contact resistance. Instead specified 15,4W on one port it is in real only 13W but even this value should by satisfactory for the majority of applications.

Orientation: If the supply voltage of 48V is in the consumen converted to 5V ,the user gains around 2.5A (if the efficiency is 90%). The compatibility with existing systems and the usage on Ethernet networks (10BASE-T, 100BASE-TX and 1000BASE-T) is kept. Even though the Power over Ethernet technology is relatively new there are already existing different devices that maintain the IEE802.3af standard. Between companies that produces those devices that maintain the PoE standard belong: Cisco, 3com, Nortel Networks, PowerDsine and many others. The main problem with the spread of the Power over LAN is the price. Therefore the PowerDsine admits, that wholesale spreading of these devices will appear after the price will be at the most one quarter higher then the price of regular switch.

This article was translated from czech version by Robert Mach (robert_mach@ centrum.cz )