PS2 connector is in these day present almost in every computer. It is used to connect keyboard or mouse (or some else pointing device). This article contains information about connection, communication (host-to-device and device-to-host) over ps2 port and also about coding of keyboard

The majority of today made keyboards is using the same communication port for communication with the computer. This port is called the PS2 port (also known as a "mouse port"). Some keyboards (mice or pointing devices) are using the USB connection, but it is not as widely used as the PS2 port. The PS2 port was developed by IBM to interface keyboards and pointing devices such as mice, trackballs etc. Before the PS2 port was put in usage, another port was used, this port is almost completely (electrically) similar to the PS2. This former port (named AT/XT) used 5-pin DIN connector.

Because of electrical similarity between 5-pin DIN connector and 6-pin mini-DIN connector, these two connectors can be easily changed with simple hard-wired adaptor.

Signals CLK and DATA serves for bidirectional synchronous serial communication between the computer and keyboard or mouse. The buses of both signals (DATA and CLK) in the computer and also in the device (keyboard) are containing a resistor (10k?) connected to +5V and an open-collector transistor on the output. This design protects it from reciprocal damage of outputs by collision during communication.

Signal RESET is used to initialize the connected device (keyboard). This operation is being run right after the computer is turned on. The keyboard is supplied by a voltage of +5V, connected to pin number 4 (according to the picture of the 6-pin mini-DIN connector). Ground for supply and signals is on the pin number 3. All levels of signals are compatible with level of CMOS circuits

In further text more general term host will be used to refer to computer (or whatever the keyboard/mouse is connected to) and term device will be used for keyboard (or mouse). The basic idea is, that the device is always generating the clock signal, but the host has always ultimate control over the communication on the PS2 port.

Information which is transmitted is of size one byte. Each information byte is sent in a frame consisting of 11 bits. These bits are:

1. The device checks the clock signal. If the line is low, transmission from the device is inhibited

The packet is sent a little differently in host-to-device communication... First of all, the PS/2 device always generates the clock signal. If the host wants to send data, it must first put the Clock and Data lines in a "Request-to-send" state as follows:

The device should check for this state at intervals not to exceed 10 milliseconds. When the device detects this state, it will begin generating Clock signals and clock in eight data bits and one stop bit.

The host changes the Data line only when the Clock line is low, and data is read by the device when Clock is high. This is opposite of what occurs in device-to-host communication. The host may abort transmission at time before the 11th clock pulse by holding the clock signal low for at least 100 microseconds. To make this process a little easier to understand, here's the steps the host must follow to send data to a PS/2 device:

1) Bring the Clock line low for at least 100 microseconds.

4) Wait for the device to bring the Clock line low.

6) Wait for the device to bring Clock high.

7) Wait for the device to bring Clock low.

10) Wait for the device to bring Data low.

11) Wait for the device to bring Clock low.

12) Wait for the device to release Data and Clock

Coding of keys of keyboard

From the point of view of coding keys it is possible to split keys into there groups. These groups are :

To basic group pertain 83 keys. These keys with their names and scan codes are listed in the table (which is placed further in the text) on positions from 0 up to 99. If some of these keys is pressed, appropriate scan code of this key is sent and after this key is released, the break code ($07E0) is sent followed by scan code of released key. If the key is being pressed for longer period of time, the appropriate scan code is being sent until the key is released.

The sequence of scan codes sent by the keyboard

The scan code in square brackets is being sent while the key is pressed.

In case that the numerical keyboard is turned on (numerical keys representing the numbers), are together with the scan code from extended group send additional scan codes. These additional scan codes are working in the same way like if the key SHIFT would be pressed in parallel. The code ($05C0) is put in front of the scan code of SHIFT key ($0624). This is so called doubling of the code ($0624). This new code is named ESH code. The ESH code is listed in the table of codes together with codes from extended group and is placed on position number 114.

The special group of keys includes all the rest of the keys on the keyboard. This group contains of five keys: PAUSE, PRINT SCREEN, CAPS LOCK, SCROLL LOCK and NUM LOCK. The first two keys (PAUSE and PRINT SCREEN) are sending different combinations of scan codes according to another key, that is pressed in parallel.

The other three keys (, CAPS LOCK, SCROLL LOCK and NUM LOCK.) cause the change of status of appropriate LED indicator. In this case the communication is being run in both directions.

If two or more keys are pressed in parallel (key from basic and extended group), the scan codes of according keys are send in the same order as they where pressed and these scan codes do not influence each other. The only exception is, if the cyclic sending of scan code is interrupted. This happens when one key is pressed for a long period of time and then is pressed some other key. In this case the keyboard stops sending scan code of key that was pressed before

On the following picture is a keyboard with names of scan codes. Those key, that are doubled have prefix N (for numerical keyboard) and prefix R (for the rest of the keyboard). Each key has its own combination of scan codes, which can not be changed.

In table below are listed all scan codes. The first column indicates the position, the second indicates the scan code and the last one shows the name of the code, which is derived from the meaning of the key. All codes, that are sent by the keyboard have 0.bit in low logical level and 10. in high, therefore the information consists always out of 9 bits. Altogether there is only 93 scan codes. The scan codes from basic group are on positions 0-99 and codes from extended group on positions 100-113. 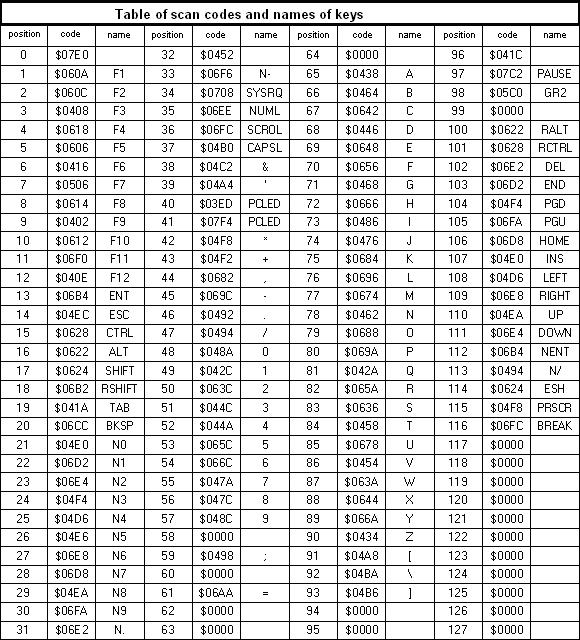 On 114th position is placed the ESH code (already mentioned before) which is being put together with codes from extended group. The codes, that are sent when the PAUSE and PRINT SCREEN keys are pressed are on positions 97,115 and 116. The break code is on position 0. The codes used for controlling the LED are on positions 40 and 41, but these codes are send by the computer.